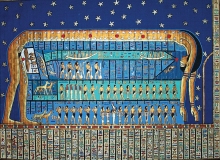 Ancient Egypt held the goddess Nut as one of the most loved goddesses. Known as the sky goddess, she held the title of "she who gives birth to the gods." From birth to death, Nut played an important role in Egyptian mythology as the barrier between the order of creation and chaos.

Then, Ra put a curse on Nut so she could not have babies on any of the three-hundred sixty days of the year. Thoth wanted to let Nut be able to have babies, so he challenged Khonsu, the moon god, to a game of Senet. If he won, he would be able to add five days to the year. If he lost, he would be killed.