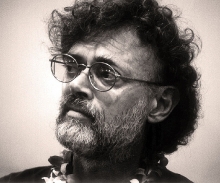 Terence McKenna (1946-2000) studied the ontological foundations of Shamanism and the Ethnopharmacology of spiritual transformation for a quarter century.

He grew up in Paonia, Colorado. At age sixteen, he moved to Los Altos, California where he was first introduced to the existence of psychedelics by Aldous Huxley’s “The Doors of Perception.” Inspired by Huxley’s rapturous depiction of the psychedelic experience, he “got started on” Heavenly Blue morning glory seeds.

An innovative theoretician and spellbinding orator, Terence has emerged as a powerful voice for the psychedelic movement and the emergent societal tendency he calls The Archaic Revival.

Poetically dispensing enlightened social criticism and new theories of the fractal dynamics of time, Terence deobfuscates many aspects of the visionary lexicon, and then some. As Artist Alex Grey suggests, “In the twilight of human history, McKenna’s prescription for salvation is just so crazy it might work.”

A longtime sufferer of migraines, in mid-1999 McKenna returned to his home in Hawaii after a long and tiring lecturing tour. He began to suffer from increasingly painful headaches. This culminated in a brain seizure, which led to McKenna being diagnosed with glioblastoma multiforme, a highly aggressive form of brain cancer. For the next several months he underwent various treatments, including experimental gamma knife radiation treatment. He died on April 3, 2000, alongside his loved ones. He was 53 years old. He is survived by his brother Dennis, his son Finn, and his daughter Klea.